And she’s married. My darling daughter is now married to my wonderful son-in-law . What a full month this has been. What a life this is. I have much to be thankful for as 2013 draws to a close. Perhaps it is best displayed in pictures of the before and after party. The pictures of the during party were done by our dear friend, Mackenzie, at RollinsCole and those will follow. I know they will be beautiful.

A few weeks before:

In the midst of the ice storm that shut down the city of Dallas for four days, my entire family met at home depot so that my dad could buy us all Christmas trees for Christmas: 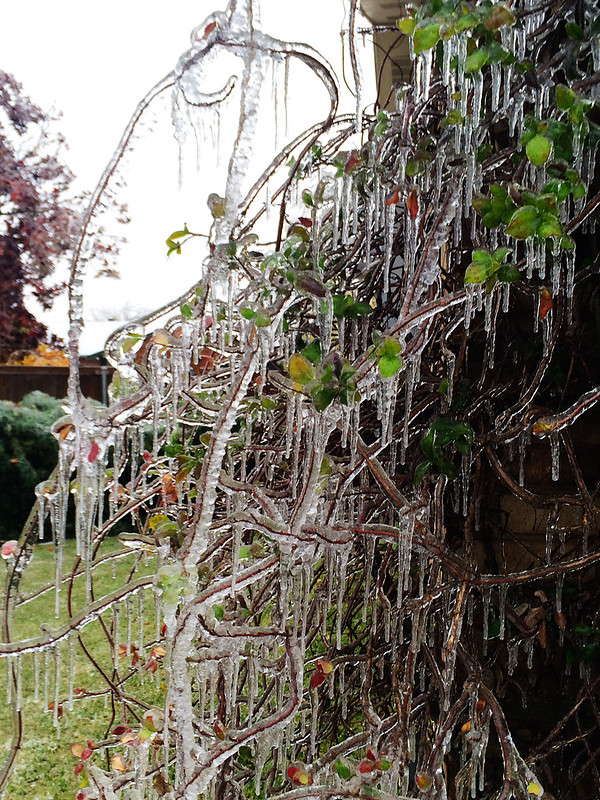 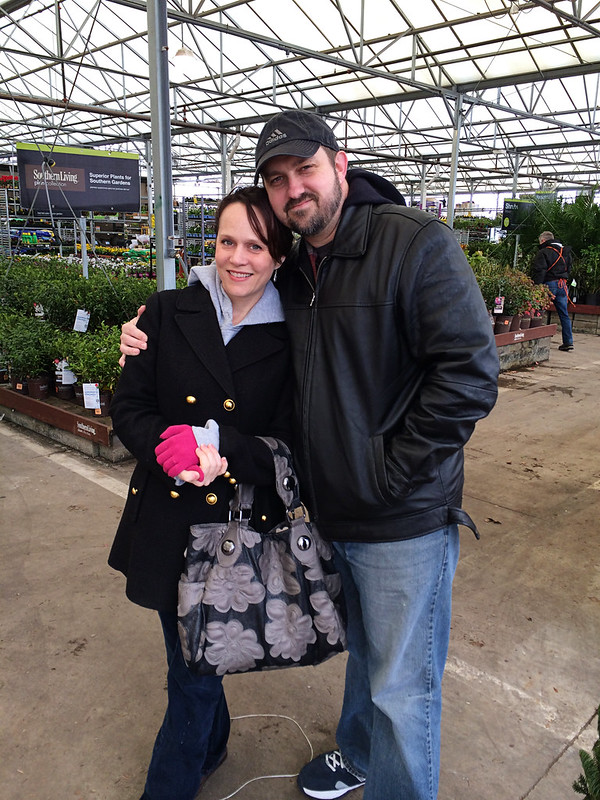 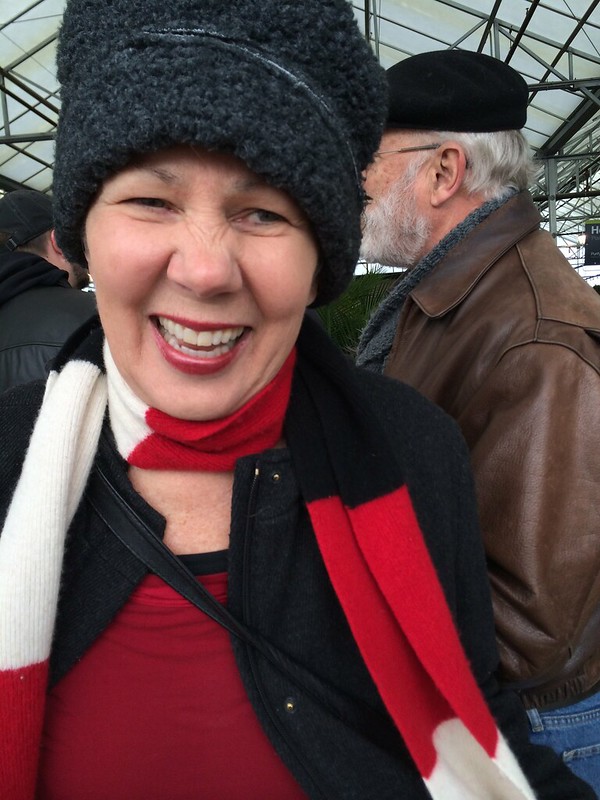 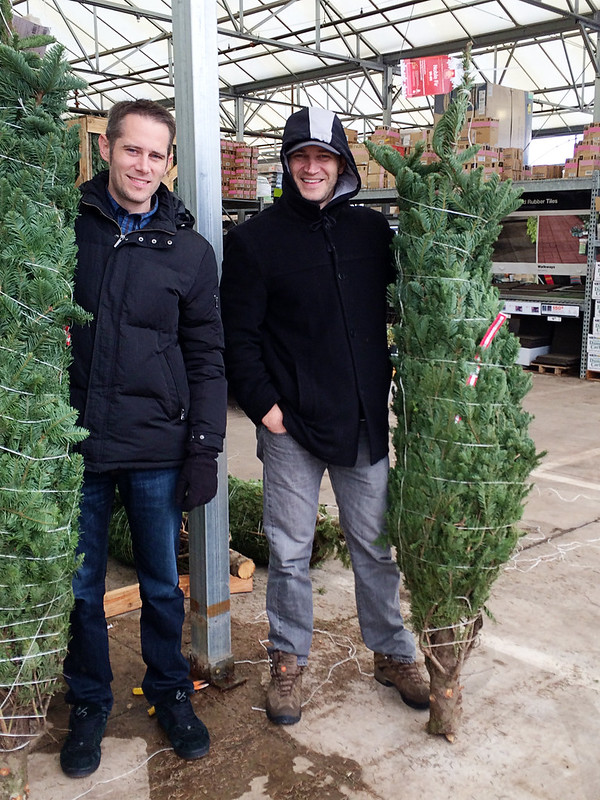 When we got that thing home, it was a frozen, solid chunk of pine ice. It sat in our living room for hours, slowly thawing out and the branches began to drop, one by one… 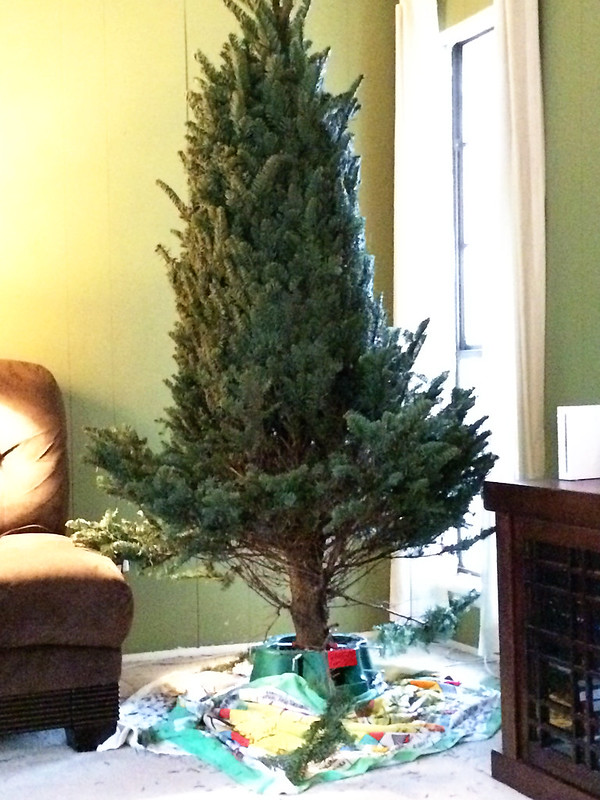 But it eventually thawed into a beautiful tree… 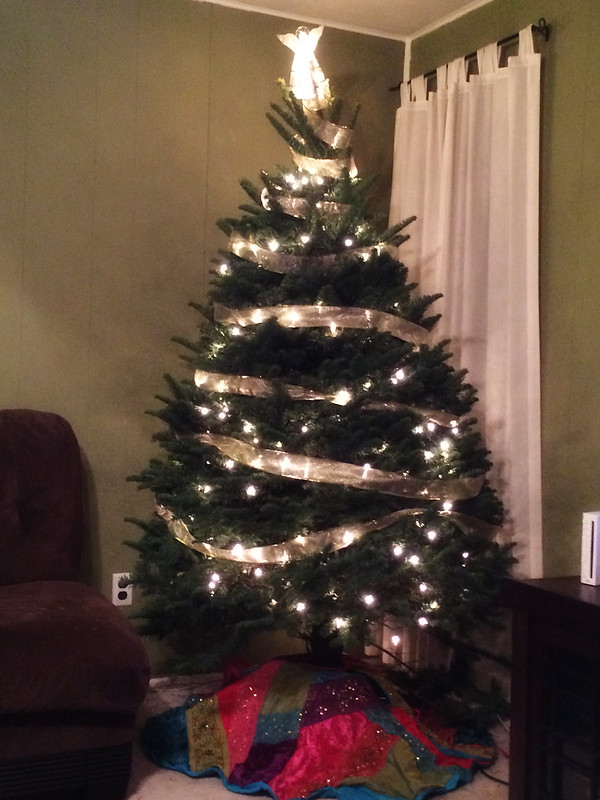 A few days after that, my dad had his orders regularized with our church and he was ordained to the diaconate in a special ceremony:

Then, we had a full-out music fest on Christmas day at my parents’ house, ending with Chris performing the song he had just worked up with my brothers, to be sung during Callie and Jeremy’s first dance two days later:

Then, the wedding. The beautiful wedding in front of a packed house at our church, with friends who came from near and far to be a part of this special day. Then, the party. The dancing may or may not have gotten a little crazy. We won’t know for sure until we see the pictures. But my sore muscles are giving me a hint as to what the answer might be. Then, the after-party at our house the next day. I’m so thankful we got to spend this day with old friends and family who came from far away. And I’m so thankful that the weather was absolutely amazing and that almost the entire day was spent outside. And I’m so thankful that nobody went to the emergency room after trying Donald’s slackline. I’m just so thankful for everything. 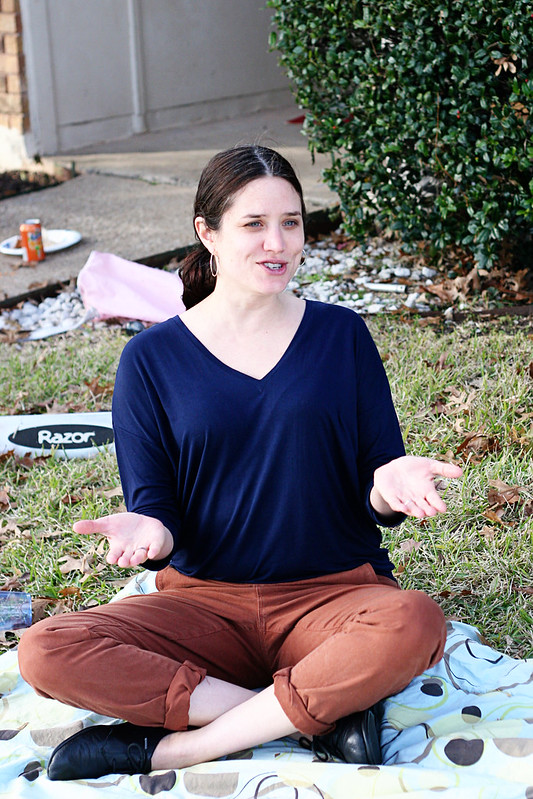 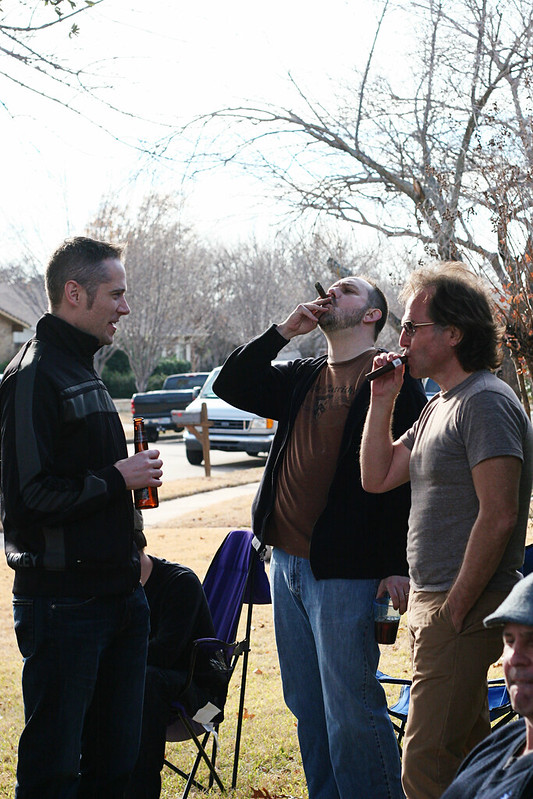 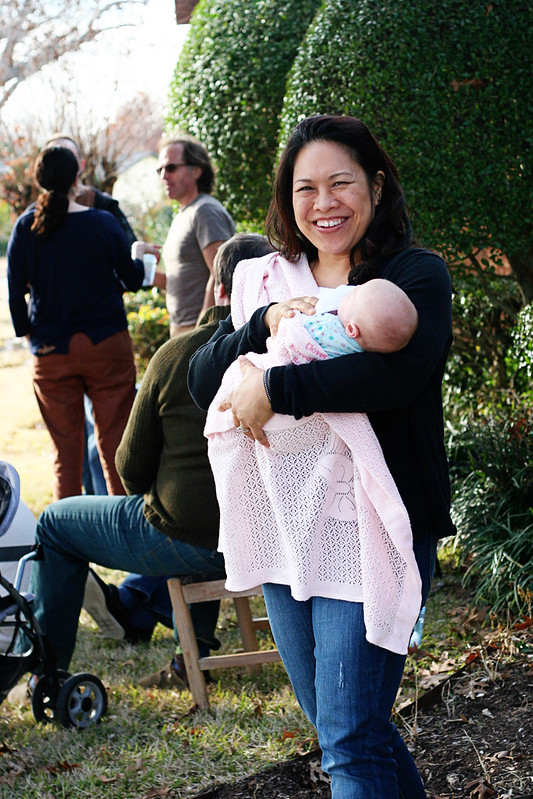 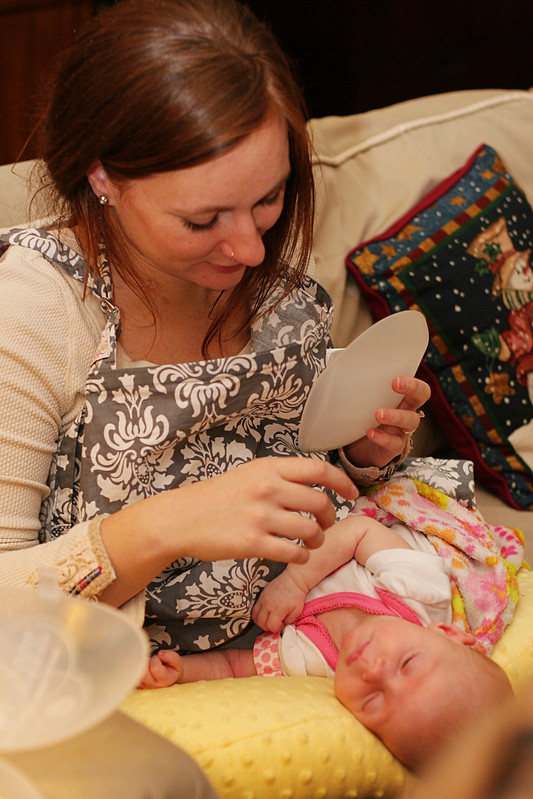 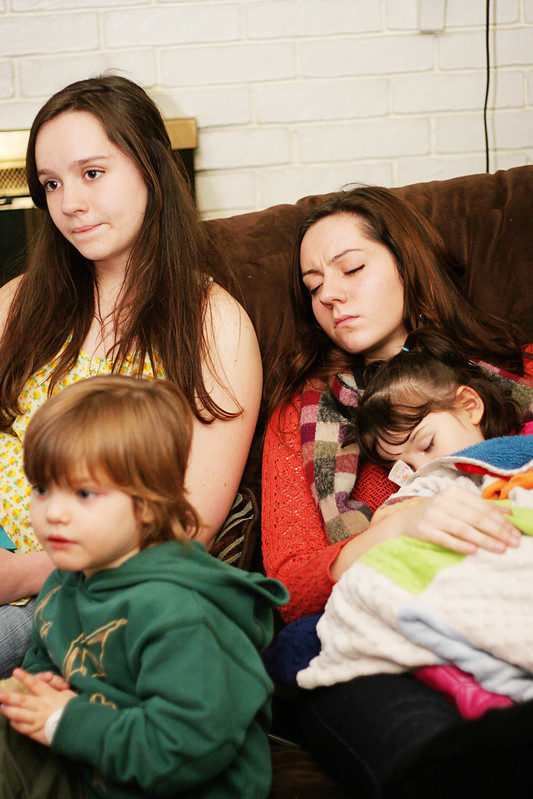 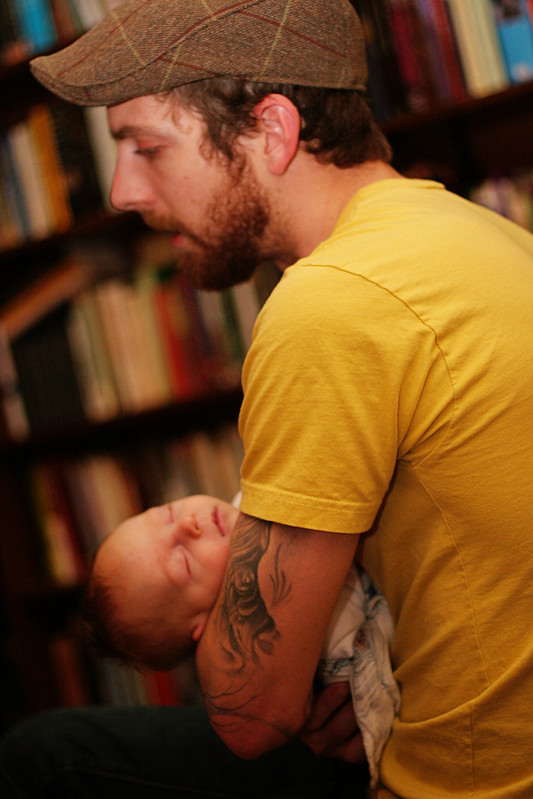 My grandma was really good at Ladder Golf 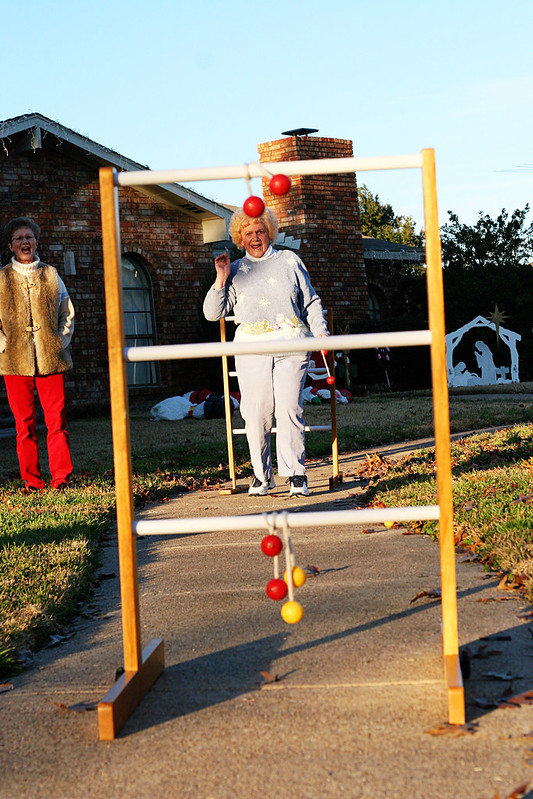 My nephew was really good at the slackline 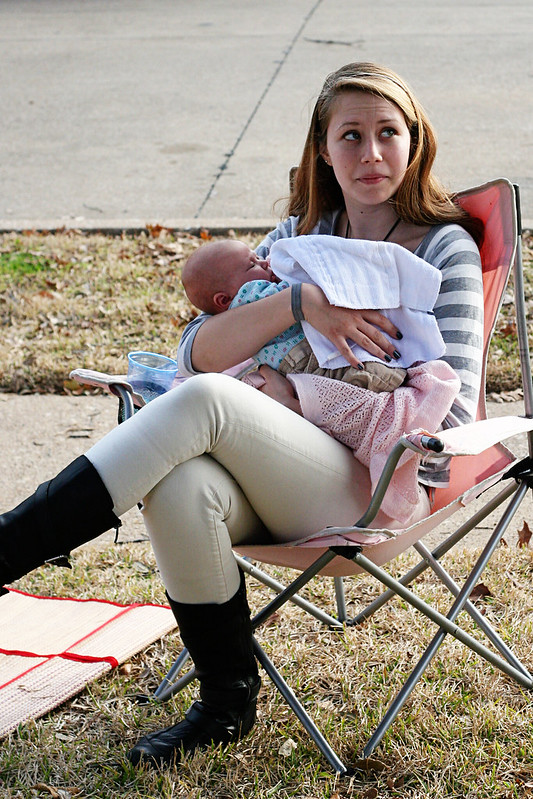 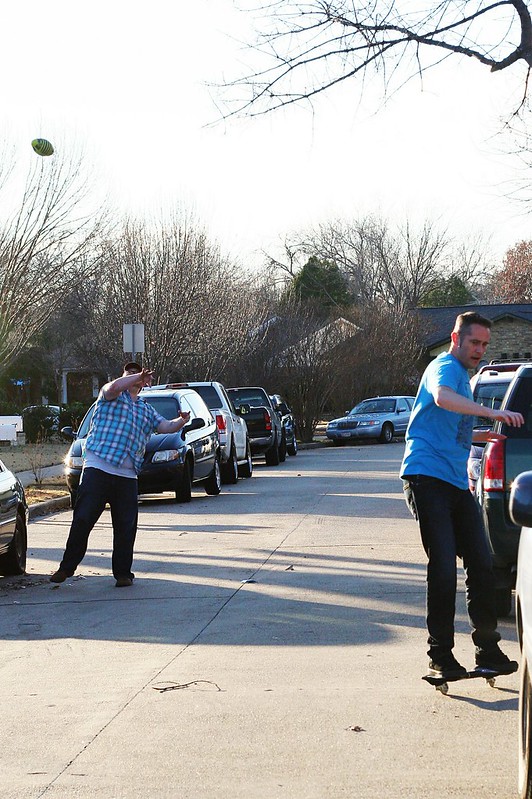 And no after party is complete without a good high-kick competition. We all felt like we did pretty good, but these pictures show a clear winner…

My sister-in-law is the high-kicking queen.

Merry Christmas to all and to all a good night. See you in 2014.

In one week, my husband will be walking our little girl down the aisle. Hi there. I’m Leslie. I’m the mother of the bride. I may or may not be a little loopy at this point. This morning I was filling my car with gas at a gas station that had a McDonald’s and after I filled my tank, I inexplicably pulled in the drive-through lane and ordered a sausage McGriddle. I’ve never ordered a McGriddle in my life. I don’t know what came over me, but it may just have been one of the best decisions I ever made. Do you know those things have syrup hidden in secret little holes? It was pretty amazing. I think every mother of the bride should get one on her last day of work before the wedding.

Then I got to work and my co-worker and friend handed me these and declared today the mother of the bride day. She said today is all about me. And who wouldn’t want Fufu Berry carbonated candies on their big day?

These months have been full. Full of things that I’ve never dealt with ever before. Good things and hard things. Then, just this week, right at the time when the amount of stuff I still have left to do is more than any twenty people can handle, I got super dumb sick and couldn’t breathe and couldn’t do one more thing and slept a lot. Then, our washing machine overflowed in the middle of the night and we were up until 3:30 cleaning it up and Chris slipped on the wet floor and fell and hurt his back. But that’s just normal life stuff that happens to anyone. It’s just that I’m the mother of the bride and these things all seem extra EXTRA right now.

Advent is one of my favorite seasons, and I’m trying to remember it. I’m trying to remember that I love this waiting time. This time when the darkness gathers and builds in the quiet anticipation of the joy to come. Next year might be easier to remember, but I’m doing what I can with what I have right now. I have 5am, each morning, alone in the dark with only the Christmas tree lights on as I pray the morning offices before the day hurtles me onward. I have the beauty of the Psalms. I have candles and color and feasts and hope. I have friends that write poetic, heart-breaking, truth-filled goodness like this:

Nicole at A Pilgrim

And I have reminders like this, in the middle of dark winter mornings, as I drive to work downtown and stop at a stoplight, waiting to turn the corner. There is light. It is coming. It is here. It is beautiful.

Hi. I’m Leslie. I’m the mother of the bride and I am ready for this week. May you and yours be blessed wherever you are as you wait and hope with me.

My dining room has turned into piles of boxes, all of them half-opened with stuff spilling out. Good stuff. Stuff to build a home with, like brand new dishes and blankets and crock pots. The UPS guy might hate us by now. We get at least two deliveries a day. In fact, as I’m sitting here right now in my jammies and bathrobe, all wrapped up in a cozy, not-new blanket, with my Dustin O’Halloran station playing in my headphones, preparing to write, I hear that trusty old truck making its way down our cul-de-sac once more. It stops in front of our house, like it always does and I hear two boxes being thrown on our doorstep as the doorbell rings.

“Callie! It’s for you!” I yell, unwilling to lose the comfort and warmth I have so long sought just to answer the door for yet more boxes. She comes running in the front hall, stocking feet sliding to a stop on the wooden floors, while dancing and singing “It’s my birthday….every day…”

It’s all good. It’s all so good. What a blessing to be so loved by so many, to prepare for the wedding feast of a loving daughter, to know that she is going from love into more love. Even to have burning eyes while she hand makes each of her wedding favors for all the loving people that are coming to celebrate with her.

I have always wanted to get older, hoping that one day I might feel old enough. Somehow, I never get there. I remember knowing that I didn’t look old enough to be able to read when I was little. Sometimes I would play that up, by breaking rules that were posted, thinking I had an excuse if I got in trouble. Mostly though, I just knew that I knew more than people expected me to know and that was a grave responsibility. I remember not looking old enough to be out of high school when I was married and getting dirty looks from the guy at the hotel who tried to tell us he was full when we tried to stay a night longer than planned on our honeymoon. I remember getting dirty looks from the woman at Kroger less than five years ago, when she asked to see my ID when I was buying wine. I know I’ve always looked younger than I am, which can be especially tough on a woman who started her family younger than most.

But lately, I’m really feeling not old enough. Maybe every mother of the bride feels that. I know everyone going to their 20th high school reunion feels it. I think every first-time grandmother-to-be probably feels it. Somehow, I’m feeling that same feeling I felt when I was four. Like I’ve got something to prove because I know I don’t look old enough to be reading. And it feels like a grave responsibility. And every once in awhile, I get defensive about it.

Tonight, on the elevator leaving work, a nice man that I don’t know held the door for me and asked me what floor since I had a big box of food I was bringing home. He struck up conversation on the way down and asked what the food was. I told him it was lunch leftovers, about to be dinner for my family. He mentioned he had three daughters and that he knew how much they would attack the food if he were to bring it home. I said I also have three daughters. And then came the dreaded question: how old are they? I steeled myself before answering him. In my heart, I was prepared for a fight. I don’t know if he saw the look in my eyes, daring him to say one thing. Just one thing. Bring it. I’m ready. But he didn’t even flinch when I said “19, 16, and 13.” He told me his were right behind mine and then the doors opened and he told me to enjoy my evening of good food with my daughters.

Maybe I look old enough today. Whatever. It was nice.

Someday soon these boxes will be gone from my dining room and we might actually get a table in there and invite people over for nice meals that we will eat on beautiful placemats with candles burning. Someday soon my house won’t smell like burning sharpie ink (or a guinea pig’s cage, which pretty much smells like pee ALL THE TIME).

Maybe then I will look old enough.